Showing posts from July, 2013
Show all

The Bible on gays & women

By Jeanette - July 17, 2013
Bible says NO,  August 8, 2012 I am revisiting a story from about a year ago when the St. Cloud Times ran my opinion piece during the debate on the Marriage Amendment in Minnesota that would have banned gays from marrying. The Times titled my writing, “Bible tells us to vote "no'.” As it is no longer available online, I quote long portions: Promoters of the Marriage Amendment argue that it protects and strengthens marriage, that same-sex attraction must not be enjoyed as opposite sex attraction is, and that the Bible says so. True—the Old Testament condemns homosexuality, but it also tells women to marry their rapists and slaves to obey their masters. Taking the Bible as a how-to manual on morals, we come up against teachings crude, comic, and cruel. . . . Judges 11:29 to 40 tells the story of Jephthah, a Hebrew chieftain who vowed that if “the Lord” delivered the enemy to him, he would offer up as holocaust whoever met him first when he returned in triumph. It was
Post a Comment
Read more 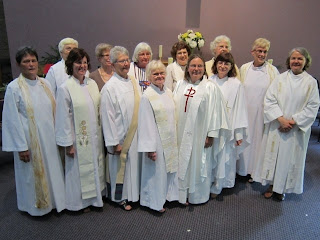 Below are women in our ordination liturgy on June 23 in St. Cloud, MN. Most are ordained priests. Bishop Regina Nicolosi is third from the left in back. Women ordained clean up sexist God-talk, July 3, 2013 In response to my St. Cloud Times article saying that the male-only God image—God as “He”—contributes to systemic and casual acceptance of women as subordinate and submissive, a reader wrote, “He is a father, not a mother.” This is clear evidence of the harm done by sexist God-talk. If the confused letter-writer would inquire of Church officials, she would learn that God is no more male than female. After insisting that God is male, not female, she continued, “If men would study the strong, gentle character of God’s masculinity, it would help in their love and respect for women.” She completely missed the point of my writing but inadvertently demonstrated it—sexist God-talk makes it impossible for people to imagine the Divine Feminine. God-He without the leavening o
1 comment
Read more
More posts